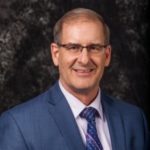 AFIT’s Executive Committee is pleased to announce that Chancellor Jeff Pittman of St. Louis Community College in Bridgeton, Missouri has reinstated his membership. Chancellor Pittman originally joined AFIT (formerly known as CQIN) in 2015, continuing the tradition of his predecessor who had become a member a few years earlier. That summer, Chancellor Pittman attended the Summer Institute in Dallas, TX, which focused on “Change Management” as the learning theme. He found the program to be an excellent experience and ended up hosting a Prosci (our change management learning partner) event that we held in St. Louis later that year.
Though Chancellor Pittman held his membership in high regard, an initiative to reorganize the District got underway early in his tenure, and he decided that he needed to take a leave of absence in 2016 until the effort was complete. In the two years that followed, the District transformed from an organization with multiple colleges and presidents to a single college with multiple campuses. With the reorganization now behind him, Chancellor Pittman felt ready to reengage with us and has reinstated his membership.
Please join us in welcoming Chancellor Pittman and the St. Louis Community College team to AFIT!​
Categories: Home Page Slider, NewsTags: Jeff Pittman, St. Louis Community College