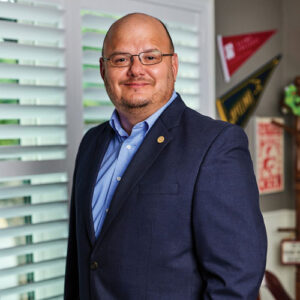 Dr. Robert Vela has more than 20 years of experience in higher education. In August of 2014, he became the 12th president of San Antonio College — the flagship institution in the Alamo Colleges District, which is made up of five distinct colleges. Vela previously served as the Dean of Student Affairs, Vice President of Student Affairs, and Vice President for Student and Academic Success for nearly six years. During that time, he also served as the Interim District Director for the Alamo Colleges District Center for Student Information in 2010.

Dr. Vela's personal philosophy is grounded in servant leadership, which is evident in his involvement with numerous professional organizations. He maintains his certifications as a Licensed Professional Counselor and a National Certified Counselor, and he holds an Ed.D. in Educational Leadership from Texas A&M University-Kingsville and Corpus Christi, M.S. in Counseling and Guidance and a B.A. in Psychology from Texas A&M University – Kingsville.

Some of Dr. Vela's many honors include: